On Saturday 24 August over 30 AQA staff, along with family and friends, took part in the Manchester Pride parade.

It was AQA’s first ever entry in the Manchester Pride parade and an opportunity to champion its own commitment to diversity and inclusion and to celebrate student success in their GCSEs and A-levels.

Everyone has the potential to achieve, and as an education charity AQA wants to give all students the opportunity to show what they can do and progress to the next stage of their lives, no matter who they are or where they are from.

This year’s theme was “Deep Space Pride – a future world equality” and also marked the 50th anniversary of the Stonewall riots, the event which sparked the modern movement of marching in solidarity for gay rights.

“Being so close to A-level and GCSE results day, the LGBTQ+ Network marched to celebrate student success and say that AQA is a place where you can truly be yourself.

“It was an immensely proud and moving experience to represent AQA in the parade and show support to everyone that feels that they are different, no matter their age or background.”

Mary Navarro, a team leader in AQA’s orders and entries team, was marching with her daughter who received her GCSE results only days earlier. Mary said:

“We went to the Wigan Pride event last year and had a great time and thought being part of the Manchester parade would be awesome. The pride events are a place where everyone can just be themselves and everyone supports that – being able to love a heart and soul no matter the ‘shell’ it comes in.

“It’s great to see AQA engaging with this event. I’ve worked at AQA for almost 20 years and I do believe we have always had a diverse workforce but it's great to see our social awareness and support is moving in the right direction.” 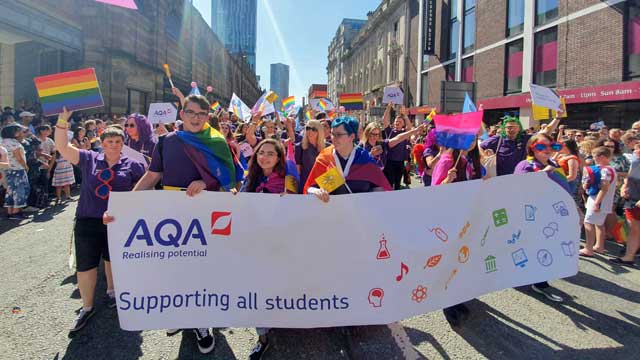