AS and A-level English Language

Because of the impact of Coronavirus (COVID-19) there are some changes to how AS and A-level English Language will be assessed in 2022. Find out more. 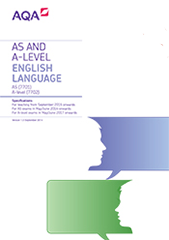 The aim of this area of study is to allow students to explore language diversity and change over time.

Students will study the key concepts of audience, purpose, genre and mode and will explore language in its wider social, geographical and temporal contexts. They will explore processes of language change. This part of the subject content also requires students to study social attitudes to, and debates about, language diversity and change.

Students should study a range of examples of language in use and research data to inform their study of diversity and change:

When analysing texts and data, students should explore:

This exploration will include:

Students will be required to use methods of language analysis to:

The following list is a guide to the areas of language students are expected to examine:

Students will study a range of texts that convey attitudes to language diversity and change. The texts studied will include those written for non-specialist audiences.

Students will develop skills in:

Previous
4.1 Language, the individual and society
Next
4.3 Language in action