Because of the impact of Coronavirus (COVID-19) there are some changes to how GCSE French will be assessed in 2022. Find out more. 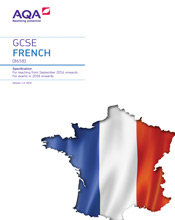 Whilst it is useful for students to concentrate on a core of key language for any given topic, it is impossible to predict all the linguistic elements they might meet when reading and listening to authentic French, or which they themselves might need to use.

For this reason, the student will need to develop communication strategies as part of the teaching and learning process, which will greatly increase their ability to cope successfully with unknown words.

When reading and listening, students can learn to infer the meaning of new words from the verbal context. For example, someone who did not know the word chêne might be able, after some appropriate practice, to deduce from the following context that it is some sort of tree: Il s'est assis sous un chêne: dans ses branches, un oiseau chantait.

Another aid to the drawing of correct inferences is for the students to bear in mind that there are regularities in the real world which make it possible to anticipate what people may say or write about it. The ability to predict occurrences in the real world makes it possible to anticipate words, and their meaning, in a given context. This is one reason why it is important for a French course to develop awareness and understanding of countries and communities where French is spoken.

Knowledge of the following patterns of word formation in French can help to understand a text.

A few 'false friends' (eg expérimenté, sensible, large) make it necessary to use this strategy with care and in collaboration with the strategy of using the visual and verbal context above. However, for each 'false friend' there are very many 'good friends' of which anglophone learners of French can make good use. These fall into two main categories: cognates and near-cognates.

There are many words which have the same form and essentially the same meaning in French and in English (eg innocent, justice, muscle, rectangle). When such words occur in context, students can be expected to understand them in English and French.

Students will be expected to understand words which meet the criteria above but which differ slightly in their written form in French, usually by the addition of one or more accents and/or the repetition of a letter (eg création, hygiène, mâle, littérature).

There are thousands of words in French which, although not having exactly the same form as the English word, can easily be understood with the application of a few, simple rules. When words which can be understood using the rules below occur in context, students will be expected to understand them.

Strategies such as those outlined above will generally be more easily applied in reading than in listening, as reading offers more opportunities to slow down, look at unknown items at leisure and study the context. Words which look the same in two languages may sound quite different.

Also, in French, there are many sound features which are not word-based (eg elision; whether or not 'e' is sounded; stress; intonation) and so make the application of some of the strategies for understanding unknown words more difficult. In particular, it must be remembered that grammatical markers in the spoken language are often quite different from those in the written one. The most obvious are the plural forms:

To hear accurately, students should have the specific differences of the spoken language brought to their attention. However some of the general strategies for understanding listed above can be used successfully in listening. For example:

In addition, the following strategies are included for listening and understanding (in place of reading the above strategies regarding cognates and common patterns between French and English).

Strictly speaking there are no French words which sound exactly like their English equivalents. There are a few near-cognates which are relatively easily recognised. They are often words imported from other languages eg whisky, ski.

Some words which in reading cause no problem can be unrecognisable in speech. For example, spécialisation has seven distinct syllables in French and five in English, it has five specific pronunciation differences in French and a complete change of stress pattern.

However, provided that certain relationships between sound patterns in French and English are recognised, then French words with a clearly 'different' pronunciation in English can be understood. Examples of patterns where a communicative strategy can be applied include the following:

This may be accompanied, where appropriate, with sounds (eg "Oh !" which, with appropriate intonation, facial expression and gestures, can convey such attitudes and functions as pain, surprise, anger, fear, pleasure and admiration).

This can be accompanied by appropriate sounds and language and can sometimes help communication to be maintained when it might otherwise break down (eg "Je peux vous aider ?" with a suitable mime if one has forgotten the words such as "balayer" and "essuyer"). This strategy has obvious limitations in a speaking test which is recorded and assessed on the basis of the recording.

Using a word which refers to a similar item to the one the speaker/writer wishes to refer to, but for which he/she has forgotten the word (eg montre for horloge, tasse for verre, fleur for rose or prêter for louer). This is not always effective and its use would be assessed according to its effectiveness in a particular context.

This can be used to refer to something when the name has been forgotten (eg "c'est rond... le fruit jaune... l'objet qu'on voit sur la table..."). The physical properties refer to colour, size, material, position and shape. The use of this strategy in an exam would be assessed according to its communicative effectiveness.

These can include requests for rewording (eg "Comment dit-on 'chair' en français…?" "Qu'est-ce que cela veut dire en anglais ?") and questions; which make no reference to English (eg "Comment s'appelle cette machine-là ?"…"Ça s'écrit comment ?"). It is clearly preferable to use such requests for help than for communication to collapse and their use will be assessed according to the context. When requests for help with specific problems occur, the teacher should maintain the role of a sympathetic native speaker and help accordingly. The teacher should avoid taking over from the student and carrying out the tasks set.

This is when a student avoids the use of a form of which he/she is unsure (eg "il faut que je m'en aille"…"je viendrai s'il fait beau") by using a form he/she finds simpler (eg "je dois partir"…"je viens s'il fait beau"). When such simple forms are used correctly and appropriately they will be rewarded accordingly. Correct and appropriate use of more complex forms will also be rewarded.

A systematic use of simplified forms may reduce error, facilitate communication and increase fluency but, if overused, this strategy may result in students failing to make full use of their capabilities.

This is where the student uses words and messages in acceptable French, avoiding the use of words which he/she has forgotten (eg "Elle n'est pas mariée" for "Elle est célibataire", "C'est comme un…" "C'est le contraire de…" "C'est une sorte de…" "Je voudrais une tranche de cette viande-là"). When used well, this strategy communicates the message effectively to a sympathetic native speaker and such use in an exam would be assessed accordingly.

Reference to specific features (eg "L'animal aux longues oreilles…" "La jeune fille qui porte des lunettes…") is often quite effective and its use would be assessed accordingly in an exam.

Reference to the function of an object and the actions that can be performed with it (eg "L'objet qu'on utilise pour ouvrir une bouteille") is a commonly used strategy which is usually effective in communicative terms.

Another strategy sometimes used by language learners is word coinage, the creation of words based either on English or French words. This strategy usually produces words which do not exist in French or, if they do exist, have a different meaning from the one intended. The use of this strategy is rarely effective in promoting communication and students would be well advised to use it only if all other strategies fail.

The development of such strategies cannot be seen as encouragement not to develop linguistic knowledge. Strategic competence is not a substitute for vocabulary learning, but a useful supplement. All language users make use of communication strategies, even in their first language, and really successful strategies usually pass unnoticed. It is an important part of the teaching and learning process.