Because of the impact of Coronavirus (COVID-19) there are some changes to how GCSE Media Studies will be assessed in 2022. Find out more. 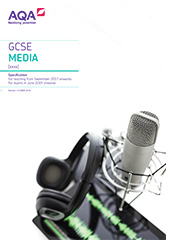 GCSE Media Studies engages students in the in depth study of media products in relation to the four areas of the theoretical framework:

Students are required to study media products from all of the following media forms:

Previous
Specification at a glance
Next
3.1 Close study products (CSPs)