AS and A-level Psychology

Because of the impact of Coronavirus (COVID-19) there are some changes to how AS and A-level Psychology will be assessed in 2022. Find out more. 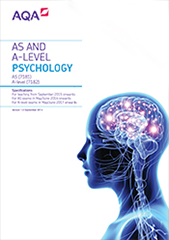 4.3 Issues and options in Psychology

Students will be expected to:

Knowledge and understanding of research methods, practical research skills and mathematical skills (see Annex: Mathematical requirements and exemplification) will be assessed in Paper 3. These skills should be developed through study of the specification content and through ethical practical research activities, involving:

In answering questions on Issues and Debates in Psychology students will be expected to illustrate their answers with knowledge and understanding of topics studied elsewhere in the specification as appropriate.

In carrying out practical research activities, students will manage associated risks and use information and communication technology (ICT).

Issues and debates in Psychology

Previous
4.2 Psychology in context
Next
Scheme of assessment