Because of the impact of Coronavirus (COVID-19) there are some changes to how GCSE German will be assessed in 2022. Find out more. 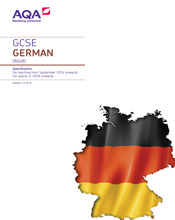 Whilst it is useful for students to concentrate on a core of key language for any given topic, it is impossible to predict all the linguistic elements they might meet when reading and listening to authentic German, or which they themselves might need to use. For this reason, the student will need to develop communication strategies as part of the teaching and learning process, which will greatly increase their ability to cope successfully with unknown words.

When reading and listening, students can learn to infer the meaning of new words from the verbal context.

In the following examples a student could be expected to make a deduction about the word in bold type from the verbal context.

In the sentence Schlafzimmer im ersten Stock haben eine Dusche, the plural form of the verb underlines that 'bedrooms' is a plural word.

Another aid to the drawing of correct inferences is for students to bear in mind that there are regularities in the real world which make it possible to anticipate what people may say or write about it. The ability to predict occurrences in the real world makes it possible to anticipate words, and their meaning, in a given context. This is one reason why it is important for a German course to develop awareness and understanding of countries and communities where German is spoken.

Knowledge of the following patterns of word formation in German can help to understand a text.

A few 'false friends' (eg also, Gymnasium) make it necessary to use this strategy with care and in collaboration with the strategy of using the visual and verbal context above. However, for each 'false friend' there are very many 'good friends' of which anglophone learners of German can make good use. These fall into two main categories: cognates and near-cognates.

There are many words which have exactly the same form, and essentially the same meaning, in German and in English (eg Museum, Hand, Name). When such words occur in a context and students can be expected to understand them in English and German.

Students will also be expected to understand words which meet the above criteria, but which differ slightly in their written form in German (eg Adresse, Knie).

There are many words in German which, although neither cognates nor near-cognates, can easily be understood with the application of a few, simple rules. When words which can be understood using the rules below occur in context, students will be expected to understand them.

Strategies such as those above will be more easily applied in reading than in listening, as reading offers more opportunities to slow down, to look at unknown items at leisure and study the context. Words which look the same in two languages may sound quite different (eg Station, Religion).

Some grammatical markers are more difficult to hear than to see. The comprehension of some plural nouns could depend on the recognition of a different article or the pronunciation of a preceding adjective (eg das neue Zimmer – die neuen Zimmer).

In order to hear accurately, students should have the specific differences of the spoken language brought to their attention.

However, some of the general strategies for understanding listed above can, with practice, be used successfully in listening, namely:

In addition, the following strategies are included for listening and understanding, (in place of reading the above strategies regarding cognates and common patterns between German and English).

Although there may be few German words which sound exactly like their English equivalents, there are many near-cognates which are relatively easily recognised. Many English words have been absorbed into German, and are easily recognised (eg Party, Manager, Job, Bar, Ketchup). Other words are sufficiently similar in sound to be regarded as near-cognates (eg Finger, Supermarkt, Student).

Some words which in reading cause no problem can be very difficult to recognise in speech (eg Religion, Ingenieur, Instrument).

However, provided that certain relationships between sound patterns in German and English are recognised, then German words with a clearly 'different' pronunciation to English can be understood. Examples of patterns where a communicative strategy can be applied include the following:

This may be accompanied by some appropriate language (eg So groß; Was ist das?; Es tut weh…hier).

This may be accompanied, where appropriate, with sounds (eg "Ah!" which, with appropriate intonation, facial expression and gestures, can convey such attitudes and functions as pain, surprise, anger, fear, pleasure and admiration).

This can also be accompanied by appropriate sounds and language and can sometimes help communication to be maintained when it might otherwise break down (eg Kann ich Ihnen helfen? with a suitable mime if one has forgotten words such as abtrocknen). This strategy has obvious limitations in a speaking test which is recorded and assessed on the basis of the recording.

Using a word which refers to a similar item to the one the speaker/writer wishes to refer to, but for which he/she has forgotten the word (eg die große Kirche for Dom, Mantel for Jacke, See or Wasser for Strand). This is not always effective and its use would be assessed according to its effectiveness in a particular context.

This can be used to refer to something when the name has been forgotten (eg Wo der Bus kommt, for Haltestelle, ein Hotel für junge Leute for Jugendherberge, ein kleines braunes Tier for Meerschweinchen). The use of this strategy in an exam would be assessed according to its communicative effectiveness.

These can include requests for rewording (eg "¿Wie sagt man 'chair' auf Deutsch…?" "Wie heißt das auf Englisch?") and questions which make no reference to English (eg "Wie heißt das Gebäude da?...Wie schreibt man das?"). It is clearly preferable to use such requests for help than for communication to collapse and their use will be assessed according to the context. When requests for help with specific problems occur, the teacher should maintain the role of a sympathetic native speaker and help accordingly. The teacher should avoid taking over from the student and carrying out the tasks set.

This is when a student avoids the use of a form of which he/she is unsure (eg "Ich freue mich auf deinen Besuch…Ich bin um 5 Uhr angekommen") by using a form he/she finds simpler (eg "Es ist gut, dass du kommst…Ich war um 5 Uhr hier"). When such simple forms are used correctly and appropriately they will be rewarded accordingly. Correct and appropriate use of more complex forms will also be rewarded.

A systematic use of simplified forms may reduce error, facilitate communication and increase fluency but, if overused, this strategy may result in students failing to make full use of their capabilities.

This is where the student uses words and messages in acceptable German, avoiding the use of words which he/she has forgotten (eg "Wo die Lehrer sitzen" for "Lehrerzimmer"…"Er hat keine Frau" for "Er ist nicht verheiratet"…"Ich möchte ein Stück von dem Kuchen da" for "Ein Stück Obsttorte, bitte"). When used well, this strategy communicates the message effectively to a sympathetic native speaker and such use in an exam would be assessed accordingly.

Reference to specific features (eg "Der Mann mit den langen Haaren. Das Haus neben der Kirche") is often quite effective and its use would be assessed accordingly in an exam.

Another strategy sometimes used by language learners is word coinage, the creation of words based either on English or German words. Although this strategy can be useful in some cases (eg by the use of -ieren: realisieren, protestieren etc) it usually produces words which do not exist in German. The use of this strategy is rarely effective in promoting communication and students would be well advised to use it only if all other strategies fail.

Another commonly used strategy is topic avoidance, when the student ignores or abandons a topic because of inability to deal with it. Use of this strategy in the examwill not allow the student to be given full credit. Use of it in a learning situation will reduce opportunities for the development or expansion of the students repertoire. It is a strategy which should be discouraged. A basic condition for communication strategies to have a potential learning effect is that they are governed by achievement, rather than avoidance behaviour.

The development of such strategies cannot be seen as encouragement not to develop linguistic knowledge. Strategic competence is not a substitute for vocabulary learning,  but a useful supplement. All language users make use of communication strategies, even in their first language, and really successful strategies usually pass unnoticed. It is an important part of the teaching and learning process.