Because of the impact of Coronavirus (COVID-19) there are some changes to how A-level Philosophy will be assessed in 2022. Find out more. 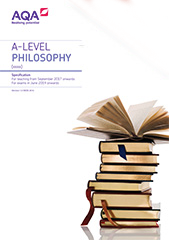 Propositional knowledge is defined as justified true belief: S knows that p if and only if:

Issues with the tripartite view including:

Perception as a source of knowledge

and responses to these issues.

The immediate objects of perception (ie ordinary objects such as tables, chairs, etc) are mind-dependent objects.

and responses to these issues.

Reason as a source of knowledge

Arguments from Plato (ie the 'slave boy' argument) and Gottfried Leibniz (ie his argument based on necessary truths).

and issues with these responses.

The intuition and deduction thesis

and issues with these responses.

The limits of knowledge

Trotter Cockburn, Catharine (1732), (attrib) ‘A Letter from an anonymous writer to the author of the Minute Philosopher’ Appendix to G Berkeley Theory of Vision Vindicated and Explained