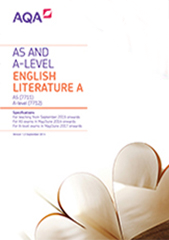 In Texts across time, students write a comparative critical study of two texts.

This specification is committed to the notion of autonomous personal reading and Texts across time provides a challenging and wide-ranging opportunity for independent study. Possible themes for the comparison are indicated below, but this is not a set list and students are free to develop their own interests from their own wider and independent reading.

The title 'Independent critical study' highlights the important idea that, within a literature course, students should have the opportunity to work independently. Although one common text could, if required, be taught to a whole cohort, at least one text should be studied independently by each student. Texts should always be chosen with your guidance and support. Students should also individually negotiate their own task.

In Texts across time, students write a comparative critical study of two texts on a theme of their choice. Possible themes include, but are not limited to:

The spirit of this component is for independent study, with schools and colleges submitting work on a range of texts and tasks. Schools and colleges are encouraged to check the appropriateness of texts and tasks with their non-exam assessment adviser, especially where there may be some uncertainty on the approach being taken, either by the school or college as a whole or by individual students.

The following conditions apply to the texts chosen:

Texts listed in the A-level core set text and comparative set text lists in Sections 4.1 and 4.2 cannot be studied for non-exam assessment. Texts chosen for study may include texts in translation that have been influential and significant in the development of literature in English.

Possible pre-1900 texts include, but are not limited to:

Students cannot use the following texts for non-exam assessment as they appear on the exam set text lists.

Examples of choices of non-exam assessment texts and possible connections

Previous
4.2 Texts in shared contexts
Next
Scheme of assessment