AS and A-level Chemistry

Because of the impact of Coronavirus (COVID-19) there are some changes to how AS and A-level Chemistry will be assessed in 2022. Find out more. 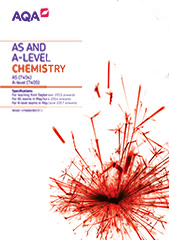 Organic chemistry is the study of the millions of covalent compounds of the element carbon.

These structurally diverse compounds vary from naturally occurring petroleum fuels to DNA and the molecules in living systems. Organic compounds also demonstrate human ingenuity in the vast range of synthetic materials created by chemists. Many of these compounds are used as drugs, medicines and plastics.

Organic compounds are named using the International Union of Pure and Applied Chemistry (IUPAC) system and the structure or formula of molecules can be represented in various different ways. Organic mechanisms are studied, which enable reactions to be explained.

In the search for sustainable chemistry, for safer agrochemicals and for new materials to match the desire for new technology, Chemistry plays the dominant role.

Alkanes are the main constituent of crude oil, which is an important raw material for the chemical industry. Alkanes are also used as fuels and the environmental consequences of this use are considered in this section.

Modification of alkanes by cracking

Halogenoalkanes are much more reactive than alkanes. They have many uses, including as refrigerants, as solvents and in pharmaceuticals. The use of some halogenoalkanes has been restricted due to the effect of chlorofluorocarbons (CFCs) on the atmosphere.

In alkenes, the high electron density of the carbon–carbon double bond leads to attack on these molecules by electrophiles. This section also covers the mechanism of addition to the double bond and introduces addition polymers, which are commercially important and have many uses in modern society.

Alcohols have many scientific, medicinal and industrial uses. Ethanol is one such alcohol and it is produced using different methods, which are considered in this section. Ethanol can be used as a biofuel.

Our understanding of organic molecules, their structure and the way they react, has been enhanced by organic analysis. This section considers some of the analytical techniques used by chemists, including test-tube reactions and spectroscopic techniques.

Compounds that contain an asymmetric carbon atom form stereoisomers that differ in their effect on plane polarised light. This type of isomerism is called optical isomerism.

Aldehydes and ketones (A-level only)

Aldehydes, ketones, carboxylic acids and their derivatives all contain the carbonyl group which is attacked by nucleophiles. This section includes the addition reactions of aldehydes and ketones.

Carboxylic acids and derivatives (A-level only)

Carboxylic acids and esters (A-level only)

Aromatic chemistry takes benzene as an example of this type of molecule and looks at the structure of the benzene ring and its substitution reactions.

Amines are compounds based on ammonia where hydrogen atoms have been replaced by alkyl or aryl groups. This section includes their reactions as nucleophiles.

Base properties (A-level only)

Biodegradability and disposal of polymers (A-level only)

Amino acids, proteins and DNA are the molecules of life. In this section, the structure and bonding in these molecules and the way they interact is studied. Drug action is also considered.

Action of anticancer drugs (A-level only)

The formation of new organic compounds by multi-step syntheses using reactions included in the specification is covered in this section.

Chemists use a variety of techniques to deduce the structure of compounds. In this section, nuclear magnetic resonance spectroscopy is added to mass spectrometry and infrared spectroscopy as an analytical technique. The emphasis is on the use of analytical data to solve problems rather than on spectroscopic theory.

Chromatography provides an important method of separating and identifying components in a mixture. Different types of chromatography are used depending on the composition of mixture to be separated.